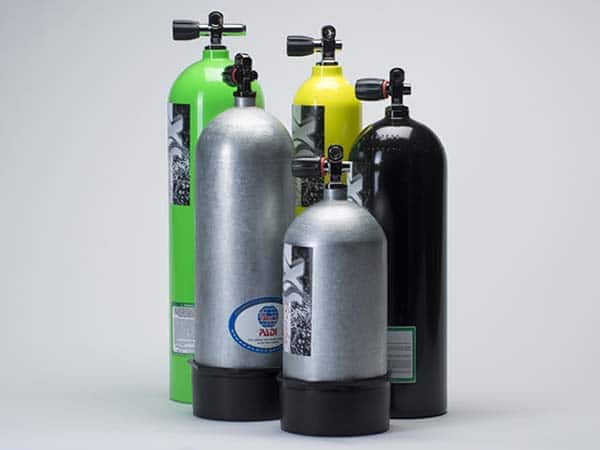 Getting to know your scuba cylinder

The most basic piece of equipment is unfortunately also the most overlooked – your scuba cylinder. You could go diving without fins, as many disabled divers do, or even go without a BCD as some harness configurations allow, but there is simply no SCUBA dive without a dive cylinder.

The types of high-pressure cylinders

These are tricky terms to define. I’m sure in everyday life all of us use these words interchangeably but in metallurgy these have very distinct meanings.
A hard material is a material that doesn’t get easily scratched. Think of a diamond which is one of the hardest substances around. It is pretty difficult to scratch a diamond, but every child could make it shatter with the use of a hammer.
That is where toughness comes into play. Toughness is the material's ability to resist fracturing. You can take the hammer that easily shattered the diamond and whack a solid block of steel with it for weeks and your chances of shattering it are non-existent. But it is rather easy to scratch the block of steel.
The last attribute is strength. You can think of strength as how much force is needed to pull on the material until it deforms.
Let’s take a diamond – It is very hard, has a high strength but its toughness is very low. Cookie dough on the other hand is not hard at all, has a very low strength but it is, as stupid as this may sound, very tough.
The dilemma engineers find themselves in, as they increase the hardness of an alloy, its toughness reduces. They have to strike a balance between the two while keeping the strength at an optimal level. To achieve this they use a process called Hardening, followed by Tempering. As the name suggests, Hardening makes the alloy hard, but unfortunately at the same time its toughness decreases as the material becomes brittle. This is done by heating the alloy to 800 – 910 Celsius and then rapidly cooling it. To make the alloy tough again it gets tempered which is heating the alloy to 200 – 700 Celsius and then gradually cooling it down.

The composition of a high-pressure cylinder

An alloy is the combination of different metals or elements. Pure elements have very little use in engineering as their characteristics make them undesirable for the uses we intent to. By mixing them though, we can create harder, tougher or stronger materials than either one of the elements would have on its own.
Pure iron or pure aluminum are neither very tough nor very hard. By adding carbon to iron it gets both harder as well as stronger. The usual carbon content in a steel high pressure cylinder is usually 0.3% - 0.5%. The same applies to aluminum, but instead of carbon, silicone is added – usually around 1%.
Common elements that are added are:

The forces that act on a SCUBA cylinder

The pressure inside most cylinders in SCUBA is around 200 bar. The force that this pressure exerts on the walls of the cylinder is immense. Imagine a 2 Euro coin and putting a small car like the Toyota Corolla on top of it. That is pretty much the force that every 2-euro coin sized piece of your cylinder has to endure. The exact numbers are 203.94 Kg on every square centimeter of cylinder wall. Transfer this to a 300 bar cylinder and you slowly get to the size of a small pickup truck sitting on each 2 euro coin sized piece of metal of your tank.

A hand grenade from the second world war releases an energy of around 250 kJ. During detonation of a 12 L SCUBA tank the compressed air releases 465 kJ of energy in an adiabatic expansion. That is nearly double the energy of a World War II hand grenade. The total energy stored in a 12 L SCUBA tank is actually much higher at 1270 kJ, which could be released in an isothermal expansion. During the rapid expansion like a detonation of a cylinder, a lot of energy is lost due to the air getting very cold.

Even though the stress on the cylinder material is pretty big, if these forces above were the only ones acting on a cylinder, they would last a lot longer than any diver could possibly want to use them. Unfortunately, there are a lot of external factors that shorten the life of our Scuba tank drastically.

The things our cylinder has to endure

Take for example the very common practice that dive tanks stay on dive boats forever. This is done frequently on larger boats that are equipped with a compressor. You combine two different metals, the aluminum from the cylinder and the brass from the valve in an extremely corrosive environment. The result can be an incredible fast destruction of the cylinder neck due to galvanic corrosion.
Misadjusted or poorly operated compressors can lead to moisture inside the cylinder, corroding it from the inside. Oxygen partial pressure is usually elevated because cylinders get stored under pressure, increasing the oxidization process rapidly. Corrosion inside the cylinder can only be spotted during visual inspection or when it is too late resulting in a catastrophic failure.
Other things our cylinder might encounter is rough handling or a rough ride on the back of a pickup truck. These could lead to dents or gouges which will compromise the strength of the cylinder walls.
It is not unheard of that dive centers or laymen try to modify their cylinders. Painting cylinders or stripping paint with the wrong technique, e.g. with applying heat, can result in catastrophic changes of the molecular structure of the metal. Cases of divers welding handles to their cylinders to make them easier to carry have been presented to testers in the past. Needless to say, that these are absolute no goes and usually result in catastrophic outcomes.

As tough as our cylinders might appear, they deserve much better treatment then we give them. A properly cared for SCUBA cylinder will easily last for a couple of decades or more. A poorly treated cylinder that e.g. has ingested water can be damaged beyond repair in as little as a few weeks.

There are a quite a few markings on a scuba cylinder. They give you all the information you need about it – starting from who and when it has been manufactured to its technical details. Unfortunately, a lot of divers are never taught what specific markings mean. Let’s have a look at a typical Aluminum cylinder from Luxfer: 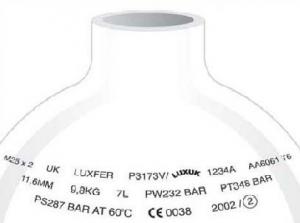 Interested to know more about scuba cylinders? In this blog you can find interesting information and updates about them.

0shares
Posted in Equipment
← Honeymoon guide to ZanzibarWhat is the purpose of (your) life? →