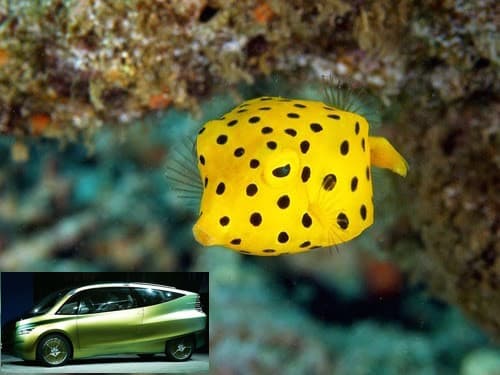 We have all heard of science taking inspiration from nature. Vehicle designers get inspired by animals to make cars lighter and more efficient. You’re probably thinking of fast and sleek things like swordfish or peregrine falcons. But what about the humble yellow box fish?

In 2006 Mercedes Benz revealed its bionic concept car, inspired by the yellow box fish. They thought that its body must have a unique way of being hydrodynamic and self-stabilizing. The box fish moves with strange and impressive agility and apparent ease in its environment.
After development however, engineers discovered that the shape of the fish's body has little to do with its speed.

This means, the car they designed was aerodynamically useless. On top, it was incredibly unstable which makes for quite an unpleasant driving experience. Not to mention the extra drag and resistance resulting in it being very un-economical. For today’s world, where we are trying to "go green", absolutely undesirable.

No car made - but still very cool

So there never was car mass production because of our little yellow friend. However, it actually has other pretty awesome features that the car companies didn’t consider (and that’s probably for a good reason).

When a larger fish threatens this cute little one, it has its own way to react. It will release poisonous proteins from its skin into the surrounding waters. These can actually kill larger fish and scare away any would-be predator. Box fish are of bright yellow colour with black spots which is a type of display called aposematism. It warns any attacker that it is poisonous and could be dangerous, just like the colouration of bees and wasps to show they can cause pain.

So, this little fish has risen pretty high in the corporate world even if it neither knew about it nor succeeded.

We can regularly see the box fish in Zanzibar on our dives. Come join us for some dives to look for the fish that was a car maker’s inspiration.

12 shares
Posted in Mnemba
← Girl’s talk – Diving while it’s “that time of the month”From sharks, boats, Olympic swimmers and airplanes →