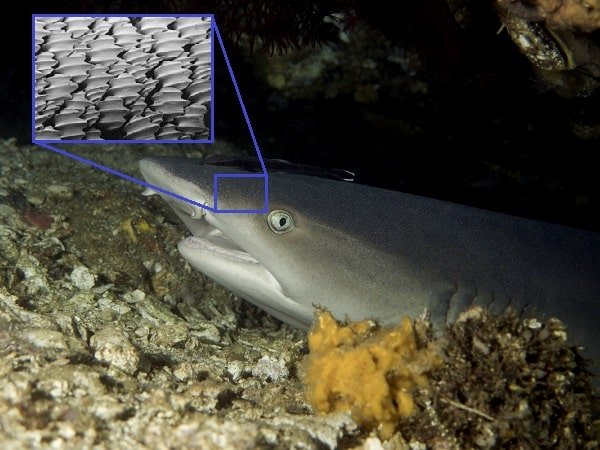 What do shark skin, boats, Olympic swimmers and airplanes have in common? If you scratched your head for a minute and your answer is still “nothing at all!”, do not worry, you are not alone. But it is not a secret that engineers are always looking at mother nature for inspiration.

The first fish started to appear about 510 million years ago and sharks followed soon after, about 425 million years ago. During this time, their base plan changed remarkably little. In this period, the earth experienced 5 large mass extinctions with drops in species variety as large as 95%. Sharks survived them all with ease so they must be doing something right. Therefore, it comes to no surprise that scientists and engineers are show increasingly more interest in these fascinating creatures.

What is so special about their skin?

They are progressively paying attention to the sharks’ skin. But what is so special about the skin of sharks? The more appropriate question would be, what isn’t? If you think of shark skin as a smooth and boring surface, you couldn’t be further off.

Their skin is essentially like sandpaper, but in a very orderly manner. Interestingly enough, ancient cultures often used shark skin for exactly that purpose – sandpaper! In Norway, sailors used to attach shark skin onto the sole of their boots. This prevented them from slipping due to the incredible texture of the skin. Imagine millions of tiny teeth or denticles all over the shark’s body, pointing in the same direction. These denticles, or dermal scales, work much in the same way like dimples on a golf ball. They affect the way water flows around the shark. These dermal scales are not fixed on a solid base, but each single dermal scale is flexible on its own. This results in an array of benefits for the shark.

Have you ever seen a boat, turtle, fish or whale with a barnacle or similar marine creature attached? That’s because they have a smooth skin or non-flexible surface that makes it easy for barnacles to stick to. The shark with its millions of flexible teeth on its skin is well prepared for these invaders. His dermal scales are constantly flexing with the shark’s movement. They're changing and limiting the space between each other which doesn’t give the barnacle a chance to hold on. This is important as barnacles create unnecessary drag for the shark resulting in a higher energy consumption to move forward.

Boats are trying to battle the barnacles with special paint. These paints unfortunately always contain one or another harmful chemical, that slowly leaks into the environment. The US Navy alone spends around $600 million a year on the propulsion of their ships. Around $50 million of that are due to marine biomass attaching itself to the hull of the ships. The good news is that the Navy is already experimenting with a shark skin mimicking silicone structure. A ship equipped with that structure would be self-cleaning while moving and the days of harmful chemical containing paints would be over.

There is however one barnacle that has beaten the shark in this evolutionary arms race: The Anelasma squalicola, but that is a story for another day…

Drag is also the key word for our next point. Not only does shark skin prohibit barnacles from attaching and thereby increasing drag, it actively reduces it! Imagine pulling a smooth sheet and a piece of sharkskin through the water next to each other. At “cruising” speed, you would need around 9% less energy to pull the shark skin. That’s because the dermal scales create tiny turbulences and thereby reduce the drag. This fascinating phenomenon is not only due to the dermal scales, but a combination of them and the wave-like motion of a shark.

From the sea to the sky and back to the water

Lufthansa engineers started to experiment with coating two of their airplanes with a structure that resembles shark skin. They used a “stamp” like mechanism to imprint the denticles into the fresh paint. Their findings are very positive, they measured a 1% decrease in fuel consumption. They can’t quite get to the shark’s effectiveness as aircrafts can’t yet wiggle their way through the sky. Although 1% might not sound like much, if you take the global yearly usage of jet fuel of well over 223 000 000 liters per year, the 1% will be a huge win for the environment.

Not only engineers have discovered the magic of shark skin. Speedo, for example, designed suits that, besides other techniques, use the principle of the dermal scales. These new suits were so effective that swimmers broke 140 world records from February 2008 to July 2009 and during the Olympics in Beijing. In 2010 the FINA banned the usage of all non-textile suits in competitions. Since then, only very few world swimming records have been broken again.

Where to find sharks in Zanzibar

To see white-tip reef sharks here in Zanzibar, you have to dive deep... very deep. To be precise, around 35 to 40 meters. We can already hear you scream that you are only allowed to go to 30 meters with an Advanced Open Water license and you are correct. The course that allows you to go beyond 30 meters is called the PADI Deep Diver Specialty, which takes you down to a maximum of 40 meters. In just 2 days you will be able to extend your maximum range and hopefully catch a glimpse of these shy animals.

So, there you have it - Shark skin made their way from sandpaper, to the sole of Norwegian sailors boots, to US navy ships, to Olympic swimmers and airplane. Scientists are also exploring medical applications. But no matter how hard we try, sharks are still ahead of us in their usage of the dermal scales. Engineers are working non-stop to fully mimic them and maybe in due time we see all our ships and aircrafts equipped with this technique. Perhaps we will even have modified wetsuits and we will start to wiggle our way through the underwater world! Then these dolphin like swimming styles will finally pay off...