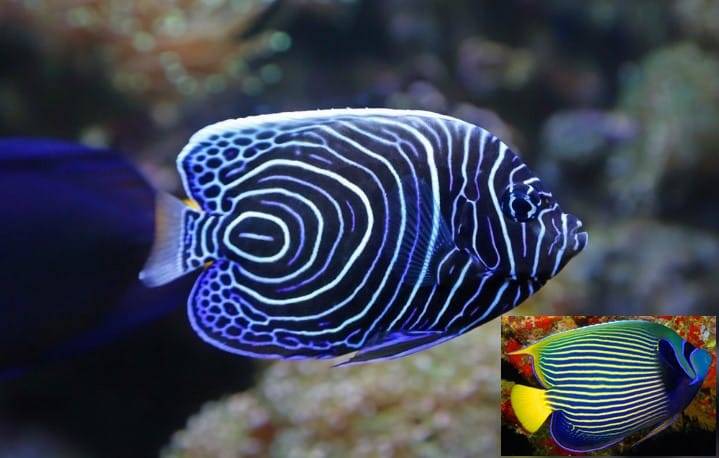 The Emperor Angelfish (Pomacanthus Imperator) is also known in some parts of the world as the Imperator or Imperial Angelfish. It certainly lives up to its name. With its stunning colors and unconventional personality it surely is one of the most appealing fish in the sea.

This impressive fish does not only charm everyone it meets but goes through a remarkable change as it reaches maturity. As a juvenile (in the blog's picture), it is a gorgeous looking fish with dark blue, purple, black and white stripes. They are crescent shaped at the front of the body, slowly merging into circles towards the caudal fin. Adults have a light blue background with yellow horizontal stripes across the body behind the pectoral fin. When these fish are around a year old and start to mature, their change in colour begins. This can be a long and slow process for some, taking up to a year in the intermediate stage. For others, depending on food availability and conditions, it is taking a week or less! One thing however is for sure, whichever stage the Imperator is in, it is a striking figure to behold.

Its diet consists of almost anything it can get hold of: Small crustaceans, algae and sponges are its main food sources which means that its mouth has to be very tough. The main ingredient in sponges is silica which would be like us eating pieces of glass for every meal!

Where can we find the emperor angelfish?

Emperor angelfish dwell in reef-associated areas at depths ranging from 1–100 m. Juveniles live alone and inhabit outer lagoon patch reefs or semi-protected exposed channels and reef flats. They tend to hang out at shrimp cleaning stations, feeding off parasites and dead skin of larger fish species. As subadults they move to reef front holes and surge channels. Mature adults are found in caves, in areas of rich coral growth, on clear lagoon, seaward, or channel reefs. Males are territorial and will defend their habitat as well as the females living with them. An angelfish territory can be as large as 10,760 square feet! Which is the same as 1 and a half football pitches! Adults are also known for making a low-frequency “knocking” sound if disturbed or threatened by divers.

So, if you fancy meeting one of these colorful characters get yourself to the Indian Ocean and say hello!