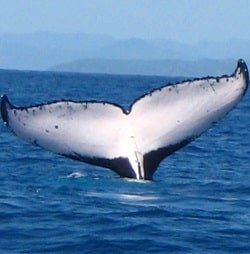 It started as your normal day in the beautiful Zanzibar for me: I was on the boat and ready for another awesome day of diving on the magical Mnemba atoll. I had a group of first time divers that day and they had an awesome time diving. We were ready to return home thinking that the adventures for the morning had finished, oh how wrong we were….

About a kilometer from the dive site we noticed something massive and odd looking in the water. At first I thought of a large piece of drift wood or something to that affect. However, then the drift wood let out a huge breath and the mysterious object showed itself to be a HUGE Humpback whale. Obviously, I had to take a moment to compose myself as the excitement was building inside me. Like a giddy school boy I skipped to the front of the boat. I wanted to get a better look at the magnificent creature that had wandered into our path. To my astonishment, the whale was not swimming away from our boat. It was rather bobbing up and down looking at us from above the water more curious than cautious. After 5 minutes of this dance between the 11m boat Manta and the animal that easily dwarfed her I had a sharp realization.

Why are we not in the water?

As soon as I said this out loud to my colleague on the boat we looked at each other: We were thinking the same thing. As fast as we could we grabbed our masks and snorkels, pulled on our fins and climbed in. The first moments I could see nothing, only bubbles and blue. Then as the foam cleared, the true scale of the animal became apparent. From the surface he was big, but when I was next to him, he was massive…. Like before the whale was pointed straight upwards with his huge body disappearing into the deep blue. As we approached, the whale turned itself over almost lazily to look at the small seemingly insignificant things that had entered the water. After more pirouettes, with one smooth motion of the animal's huge pectoral fin he righted himself. He started to come towards us. One great eye pointed directly at us, the animal cruised past us before he dived into the great big blue.

Shock and disbelief washed over us all as we continued our journey home after this. Those of us lucky enough to catch small amounts of video from the encounter watched and re-watched it. I personally showed everyone I possibly could!

Words cannot express the joy and excitement felt that day, the day we had a whale of a time.

Zanzibar is on the migration route for Humpback Whales (Megaptera novaeangliae): between July and August they come up with their babies from the cold waters of South Africa. They are directed to the warmer currents of Somalia. During September and October they start to head back to the South African waters. There, summer is coming and the babies are strong enough for cooler waters!

In Zanzibar we do not have such activities as ‘whale watching’. We do casually bump into these wonderful creatures while we are out on the boat. In those lucky moments we will definitely enjoy the show from the surface or will have a WHALE of a time swimming with them!